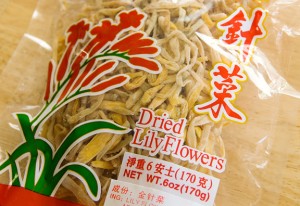 Also known as golden needles and tiger lilies, dried lily buds are the unopened flowers of day lilies.  The lily, Hemerocallis to use its scientific name, has been used in China as both a food and medicine for over 2,000 years. Dried lily buds are yellow-gold in color, with a musky or earthy taste. Two dishes featuring lily buds are Muxi Pork, a stir-fried dish, and Hot and Sour Soup.

When purchasing lily buds, look for ones that are pale in color, and not brittle.   At home, store them in a jar in a cool and dry place. Before using, you may need to cut off about a quarter inch at the bottom to get rid of the woody stem. Like many other “woodsy” Chinese vegetables, lily buds must be soaked in warm water (in this case for about thirty minutes) before use. They can then be left whole or cut in half crosswise as called for in the recipe. Or, for better flavor, try tying them in a knot. 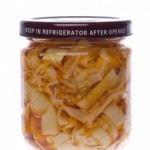 Another popular ingredient in soups is menma. Menma is a Japanese condiment made from lactate-fermented bamboo shoots. The bamboo shots are dried in the sun or through other means before the fermentation process. Menma is a common topping for noodle soups, such as ramen and hot and sour.

Kamaboko is a cured, processed seafood product of Japan, known as surimi. It is made of pureed white fish and processed with preservatives like MSG to keep its freshness. The mixture is shaped and steamed until it becomes firm. Outside of Japan, kamaboko is often referred to as fish cake. One example found in the West is kanikama (also known as kani kamaboko), or imitation crab. This variation of surimi is quite common in the West as it is a cheap substitute for real crab meat.