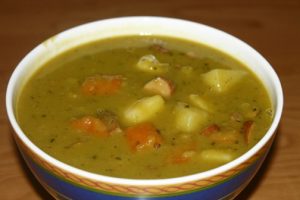 Split pea is a favorite of mine because I can make it in 35 minutes. Even though I make only one quart of it at a time, I saute my vegs in a 2 quart pot so I can get them all browning and carmelizing.  (Double the recipe if you want 2 quarts.)

For one quart, I begin by washing and preboiling 3-4 oz of split peas for 5 minutes, rinsing them again, add new water, boil again for 5 more mins, then rinse again, cover with water and let simmer while you chop. 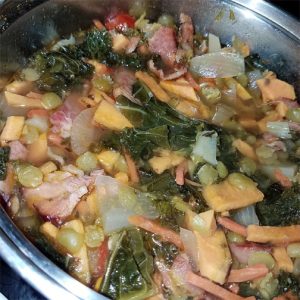 I start with a tsp of olive oil and chop a large onion. I like a lot of onion. I get it carmelizing in the pan and add 2 chopped carrots and  2 chopped celery stalk. I like equal carrot to celery ratio. If I chop them fine enough, I don’t have to zap them later with the hand mixer.

I let that all cook together while I chop 6 garlic cloves. I like a lot of garlic also. I add the garlic in, then thinly slice and then chop a small white potato and a small sweet potato. if I keep it thin enough, the potatoes will melt right into the soup, thickening it.

Then I add the peas with their water and enough lowfat chicken broth to cover it by 2. This recipe is without ham but add it here if you like.  I don’t miss the umami flavor of ham because I add 1 tbsp Three Crabs brand Fish Sauce. Sounds gross if you’re not used to it. Don’t smell it or taste it on its own. But for high umami flavor, it’s my go to lowfat version of adding a ham hock. If you use the fish sauce, you’ll need less salt. I add a tsp of salt as well as the fish sauce.

I add 1/2 tsp each of liquid smoke, cumin, basil, poultry seasoning, a tsp of oregano and basil,  a tsp of fresh thyme leaves, and a tsp squirt of tomato paste.  A shake and a half of cayenne per quart of soup adds a kick without overheating it.

Here’s where I add kale or collards or whatever kinda greens I have on hand, not just for the flavor but for the nutrition.

Then I set it on a low simmer, barely but steadily bubbling, and set my timer on 20 minutes. At 20 minutes I check to see if it needs more broth or water to taste. I like it a little soupy so I add more water and broth to keep it topped of. If you like it thick and chunky, keep the lid off as it simmers another 20 minutes.

When it’s done, I can either use the hand mixer to make it very smooth, or I can just kind of whip it with a fork until it’s the consistency I like. I usually leave it chunky and soupy.

FOR A HOTTERY, SPICIER VERSION

Add a 1/4 to 1/2 tsp of crushed Szechuan peppercorns to a half tsp of cayenne or red pepper flakes per quart of soup, more if you like it hot.

I finally got the hang of how much hot-spice-ratio to Szechuan-peppercorn to get the mild burn mouth numbing effect I like.  I use twice as much Sz peppercorn as I do cayenne/red pepper flakes combined.) I can use more red pepper flakes, chilies and cayenne than I normally would bcz the Szechuan peppercorns make their flavor milder. I like the mouth numbing effect of the peppercorns especially with a velvety umami dish.