I discovered the secret to melt-in-your-mouth chicken is a process called “velveting” and I do it every time now. A simple corn flour and egg white marinade 30 minutes before a 60 second parboil, velveting is a pre-cooking technique used to prevent delicate foods from overcooking. The velvet coat protects the flavor and texture of the food when it is placed into hot oil or water.  Velveting is not a tenderizing method, but it keeps foods from becoming tough. 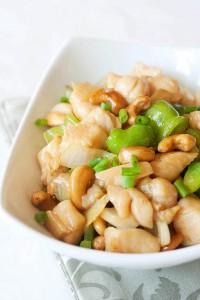 How I use it 90% of the time: I’ll let a package thaw, then lift the chicken directly from the marinade and into panko bread crumbs. Then I saute it in a scant amount of coconut oil.

To precook for another recipe: into a pot of boiling water, spoon the chicken chunks. Separate the pieces quickly, and remove after 60 seconds. Remember, you are just par-boiling them, you will cook them later. The water will stop boiling because the chicken will cool it. It’s ok if it does or does not.  Drain into a strainer. 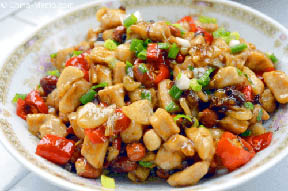 I never parboil.  I’ll lift it from the velvet slurry, the egg white cornflour mixture, and drain it a little, then put the chicken chunks or thin slices into a grill pan or saute in 2 tbsp of coconut oil until just brown each side.  I’ve also breaded the pieces with breadcrumbs before going into the pan.   I’ve never made it this tender. The corn flour is the important ingredient for the velvet slurry. Saute maybe 3-5 minutes at medium high heat.

I’ve also made the slurry using just a cup of Eggbeaters egg replacement stuff, 3 tbsp corn flour and vinegar.  The formula to make it tender is egg white, corn flour and an acid. The other ingredients are to season it.